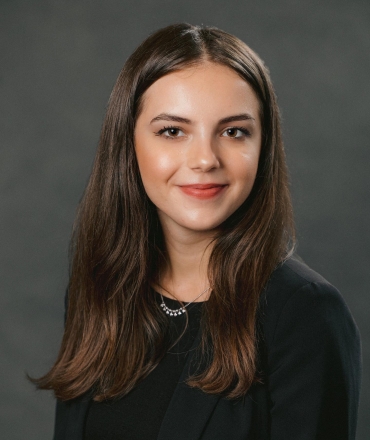 Long before she came to Ohio State, Vlera Rexha had ambitions of improving the legal system in her home country.

Rexha, a native of Kosovo, has always been passionate about continuing to expand people’s rights. Kosovo, which declared its independence from Serbia in 2008, is still in its infancy and Rexha wants to play a role in developing its legal system.

She completed her bachelor’s degree in law at the University of Pristina in Kosovo in 2019, with an eye on coming to the United States to expand her education.

“When I was in law school in Kosovo, I learned about the law system there and the improvements it needs,” she said. “I applied for the Fulbright scholarship and had heard that the Alternative Dispute Resolution (ADR) program here was very good. I was aiming for the certificate in ADR, so I decided to come to Ohio State.”

“Every single class I chose taught me something new, and all of the professors were inspiring, kind and approachable,” she said. “It was also nice to be around students from all over the world and get to know as many people as possible. I always wanted to be in a space where there was a lot of diversity, because where I come from, there is not a lot of diversity.”

Even though the LLM program only lasts one academic year, Rexha found ways to get involved. She participated in the Internal Lawrence Competition in Negotiation, the LLM International Commercial & Investment Arbitration Moot Competition, and participated in the mediation clinic so she could mediate real cases in court.

After graduating in May, Rexha hopes to implement what she learned back in her native country. She explained that because Kosovo is still a relatively new country, its legal and justice systems are still being developed and an overwhelming number of cases are going to court, creating a major backlog. She hopes that bringing her experience in ADR can help alleviate some of the excess number of cases.

“Every case of every kind goes directly to court there and it slows down the processing of each case and it also makes people lose their trust in the justice system and its efficiency,” she said. “That is really what made me want to come to Moritz. I’ve been inspired to do what I am passionate about. I saw that each professor here really cared about what they were doing, and that prepared me to have clear goals.”

Upon her return to Kosovo later this year, Rexha is set to work for a non-profit organization called Balkans Policy Research Group (BPRG) as a legal expert and senior researcher. BPRG is self-described as “an independent, nonpartisan think tank dedicated to contributing to state-building and societal harmony in Kosovo, and to facilitating state reconciliation in Kosovo and peace in the Western Balkans. Through evidence-based research, analysis, advocacy, policy dialogue and expertise, its ultimate aim is to bring the region closer to the EU.”

While at BPRG, Rexha will work towards amending new laws and evaluating Kosovo’s constitution which she said, “needs changes to evolve with society.”

While Rexha’s current focus is getting into the workforce, she said her overarching goal is to bring more awareness to ADR in Kosovo, which could mean eventually starting a new venture of her own.

“My goal is to open something myself that will contribute to ADR. It could be promoting the use of ADR or dealing with specific disputes like women’s rights to property and commercial contract disputes,” she said. “One of my goals is to have something on my own, create something new that would help the courts be more efficient and create a space for people to be able to resolve their disputes in a more cost-efficient way.”