Exploring the limited and disparate impact of fragmented reforms

In 1972, the US National Commission on Marihuana and Drug Abuse, known as the Shafer Commission, issued a report advocating a “social control policy seeking to discourage marihuana use” but asserting that criminal law was “too harsh a tool to apply to personal possession even in efforts to discourage use.” In 1973, Oregon became the first state to implement the recommendations of the Shafer Commission by decriminalizing marijuana statewide. Ten states followed suit in the next five years: Alaska, California, Colorado, Maine and Ohio in 1975; Minnesota in 1976; Mississippi, New York and North Carolina in 1977; and Nebraska in 1978. In 1977, President Jimmy Carter even urged Congress to consider marijuana decriminalization. The decriminalization movement stalled throughout the 80’s and 90’s with President Reagan’s focus on the war on drugs, but the 2000’s brought a sustained attention to the issue with a wave of decriminalization efforts, medical-use and adult-use cannabis legalizations across 35 states, and a rapidly changing public opinion.

The terminology surrounding “decriminalization” and “legalization” can be unclear, in part because marijuana reforms take many different forms. Here are working definitions for this discussion: 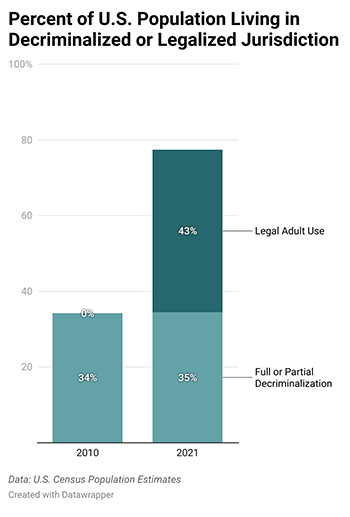 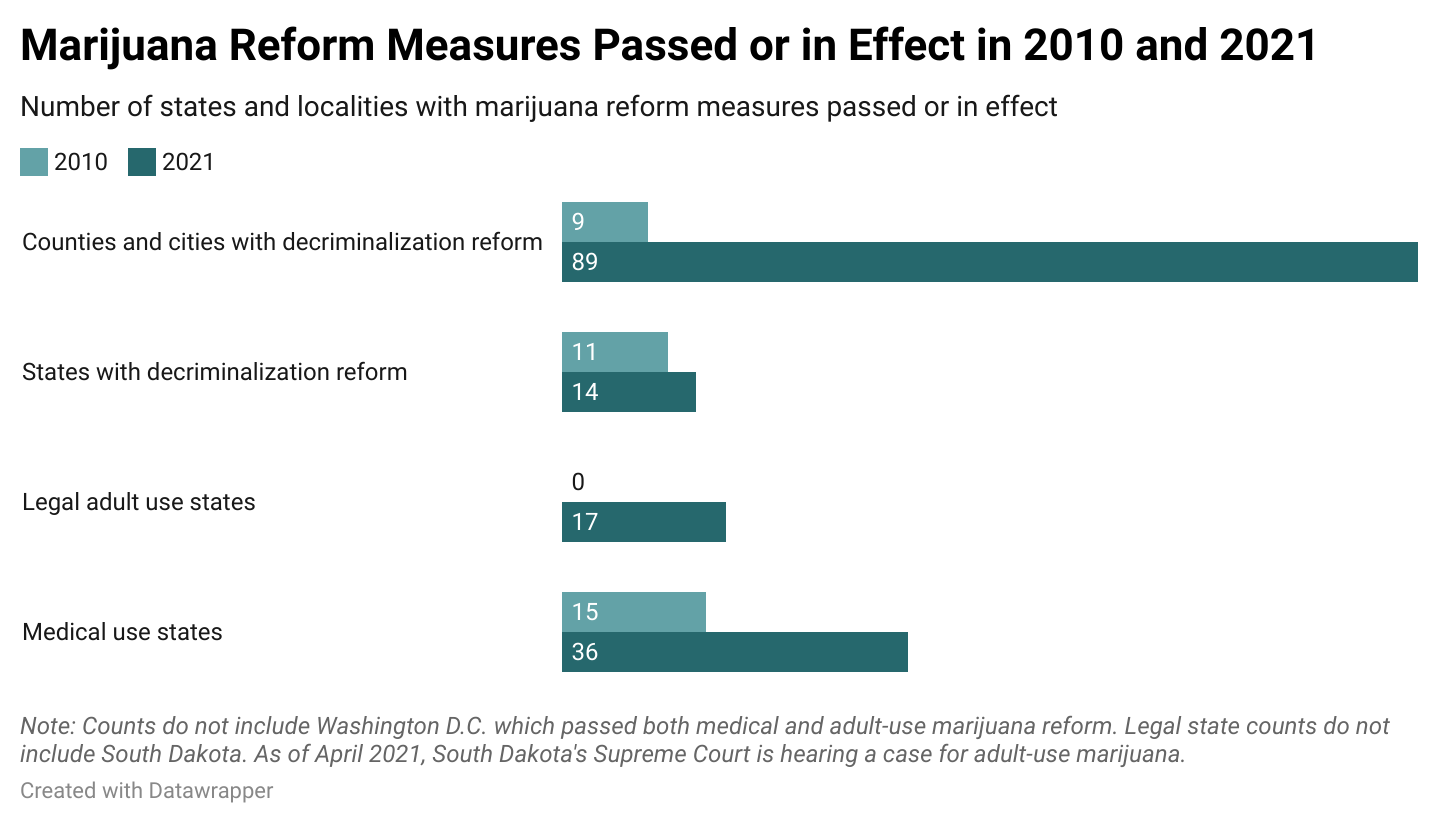 Not all decriminalization is created equal

These numbers can mask the fact that not all decriminalization initiatives are created equal and that some forms of decriminalization do not ensure significant reduction in criminal justice encounters for marijuana users. Despite the growth in the number of states that have fully legalized cannabis for all forms of adult use (17 states, the District of Colombia and three U.S. territories), residents of 14 states (29% of the U.S. population) continue to be barred from using cannabis lawfully even for medical purposes and many others are subjected to a patchwork of decriminalization statutes, which can differ from a city to city if full decriminalization is not adopted on statewide basis.

Explore this map in Tableau

Decriminalization statutes vary across a number of factors that can affect the impact and outcomes of these reforms. For example, these laws differ on what conduct is decriminalized (amounts and location of possession), who qualifies for relief (e.g., first-time offenses only, probationers), whether possession is a civil or criminal infraction and when fines are imposed and at what level. Finally, how these laws are applied and enforced by law enforcement and other official actors can vary. Here are some examples of these differences:

1. Fines – In North Dakota, a partially decriminalized state, the maximum penalty for less than 0.5 ounce of marijuana is $1,000, more than the average monthly rent for a 2-bedroom apartment. While in Minnesota, North Dakota’s neighbor, a person in possession of 1.49 ounces of marijuana or less would be fined only $250. In additional to nationwide differences, there is often considerable in-state variation. For example, some cities in Ohio, such as Athens and Cleveland, have no fines associated with marijuana possession of 200g or less. However, the same act of marijuana possession in a neighboring town may be subject to the state’s partial decriminalization law which imposes up to a $250 fine and up to 30 days in jail for possession of 100g of marijuana or less.

Beyond the costs of fines, there are often serious, even criminal, repercussions for those who cannot pay. Unpaid civil fines may trigger a misdemeanor offense or a driver’s license suspension. For partially decriminalized jurisdictions that treat possession as a minor criminal infraction, unpaid fines could result in jail time.

2. Decriminalized for whom? There are often exceptions codified into decriminalization reforms excluding people with marijuana-related or other types of criminal records. Many decriminalization laws stipulate that marijuana possession is only decriminalized for first or second-time offenses. Those who are found guilty of a second offense or third offense face steeper fines and potential imprisonment. Some jurisdictions, like North Carolina, still leave the possibility of a suspended jail sentence on the table for a first-time offense.

Jurisdictions that treat marijuana as a criminal infraction can result in severe consequences for documented and undocumented immigrants alike. Marijuana arrests can lead to deportation and, for many marijuana convictions, can trigger a mandatory sentence in an immigration prison.

3. Enforcement loopholes – A jurisdiction’s laws on paper do not always reveal how the law is enforced in practice. New York state, for example, first decriminalized in 1977 mandating that possession of 25 grams of cannabis or less would result in no jail time and a maximum $100 fine if possession was out of public view. Yet, individuals who were asked by law enforcement to empty their pockets were now subject to harsher punishment and the possibility of jail time for public view possession. According to the Bronx Defenders, law enforcement frequently used this loophole to make unlawful arrests and by their count, these unlawful arrests accounted for 40% of all possession arrests. In 2019, New York passed a legislation closing this loophole and later legalized adult-use, but half a million people were arrested in New York for marijuana possession between 1997 and 2010. New York is not the only state to stipulate that possession must be out of public view, leaving the door open for this loophole to be exploited by other jurisdictions.

In addition, in Ohio and some other decriminalization jurisdictions, statutes criminalizing possession of drug paraphernalia remained in force resulting in arrests and prosecution for having rolling papers or a pipe along with a small amount of marijuana.  In some settings, police could and would continue to criminally enforce marijuana use through these paraphernalia prohibitions.

4. Civil or criminal infraction – In some decriminalized jurisdictions, marijuana possession is treated as a civil offense akin to a traffic ticket. However, in many others, such as Missouri and North Carolina, possession is still treated as a criminal offense and subjects an individual to a formal criminal record. While a first-time offense may not result in a jail or prison sentence, those caught and convicted will possess a misdemeanor conviction on their record, are subjected to a possible 30-day stay in jail, and are burdened with the downstream consequences of a criminal record.

Marijuana and arrests in the 21st century 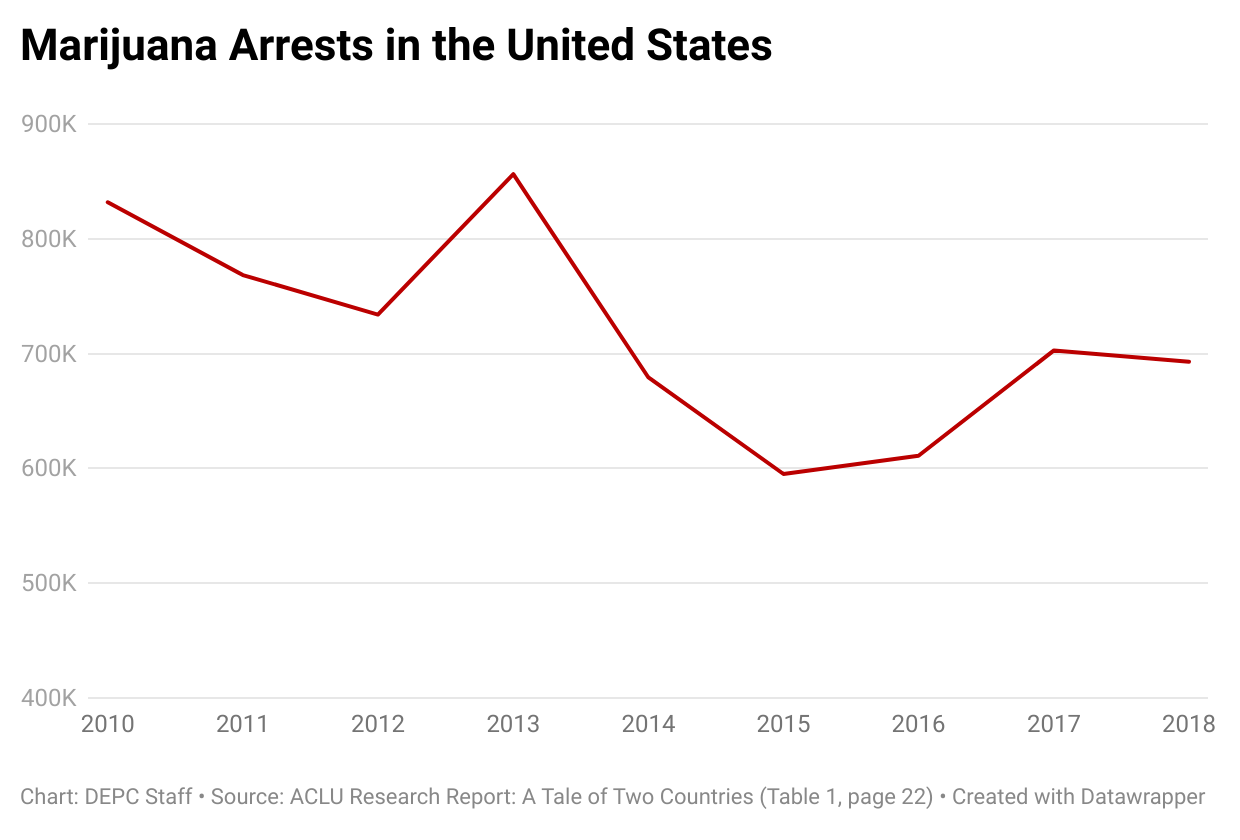 Over the past 30 years, America’s support for the policies enacted during the War on Drugs has slowly dissipated and more than half of all Americans support “recategorizing drug offenses from felonies to civil offenses” (55%). While decriminalizing statutes and legalization efforts are a welcome step forward in the marijuana arena at the state level, without federal action on decriminalization or legalization, Americans will continue to live under a patchwork of disparate measures leaving some exposed to the continued dangers of arrest and imprisonment for cannabis offenses while others accumulate wealth from a legal cannabis industry.