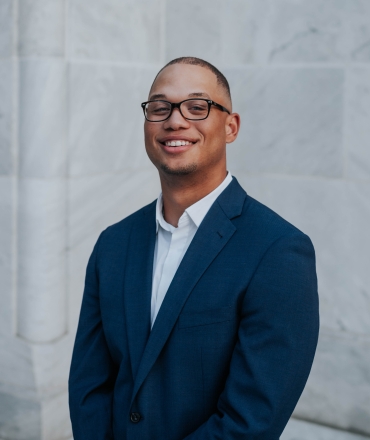 When Stephen Collier enrolled at Ohio State as an undergraduate student in the spring of 2014, it is safe to say law school wasn’t on his radar.

Collier, a native of Leesburg, GA, was a highly rated high school quarterback in the Peach State when he committed to play football for the Buckeyes. When he enrolled in January of 2014, he did so alongside the likes of current NFL players Curtis Samuel, Terry McLaurin, and Sam Hubbard, just to name a few.

Despite limited playing time due to injuries, Collier had such a positive experience at Ohio State, that he stuck around to get his master’s degree in Kinesiology and Sports Management. After working for Under Armour, the Atlanta Falcons and Atlanta United FC in a variety of sales roles, Collier said law school began to emerge as the next step in his career.

“When I was working for the Falcons, the deputy general counsel was a Buckeye. We hit it off, and after a while we started talking about some of the things that he was working on,” he said. “During that time, I was feeling a bit stagnant in the role I was in, so after talking with him and a few others, I realized the next step for me was law school.”

Collier said that in addition to his connections with the Falcons, he also took a sports law class during his graduate studies that also piqued his interest. With Name, Image, and Likeness (NIL) currently at the forefront of the college sports landscape, Collier said that is an area he could potentially see himself exploring.

“That area definitely interests me, it is a very cool space,” Collier said. “I took a class with (Ohio State Director of Athletics) Gene Smith while I was in grad school that discussed the business of college sports. To see the way NIL has evolved is incredibly interesting.”

However, Collier added that just because he is a former athlete doesn’t mean sports law is the predetermined area of practice for him.

“I am really just trying to use this first year of law school to get as much exposure as I can,” he said. “I am going to a lot of different programing that Moritz sets up and trying to get a better feel for what I want to do. I do know that eventually I want to do something that is helpful and beneficial to people.”

As Collier continues to navigate his first year at Moritz, he said that despite their obvious differences, law school and football have similar challenges, and that playing football at Ohio State prepared him for some of those tests.

“The appreciation that I gained for consistency, routine and repetition in sports is something that I have tried to take with me in my law school journey,” Collier said. “I watched an incredible amount of film my first two years, but I didn’t start to see improvement until I was on the field in practice. Now in law school, it’s the same thing. It is just a matter of repetition. I am taking practice exams, writing briefs over and over again, and making sure that I am getting those repetitions to be the best I can be.”

Collier said that his time as a football player at Ohio State prepared him for the competitive atmosphere of law school. During his time at Ohio State, Collier was in the same quarterback room with J.T. Barrett, Cardale Jones and Joe Burrow. He added that just like his college athletic career, he is surrounded by “the best of the best,” but that his football experience helped mentally prepare him for this next step.

“Having that experience in my back pocket has made law school slightly less daunting,” he said. “If you spend the extra time just honing your craft, you are going to be OK.”

While Collier doesn’t have a definite answer on what area of law he will be practicing just yet, the Georgia native does know where he would like to practice once he has earned his degree.

“I see myself here in Ohio. I love Columbus,” Collier said. “Coming back after working in Atlanta for a few years has enforced that. The city itself is amazing and the energy I feel from Ohio State in general invigorates me. I want to entrench myself in this community and give back to a university that has given so much to me.”