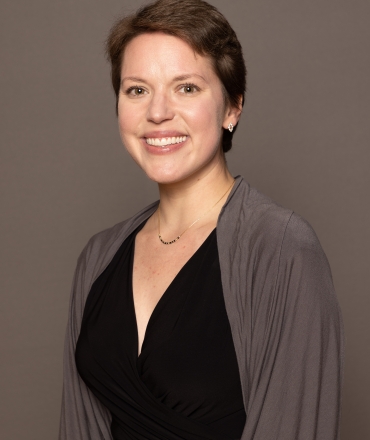 In 2020, the entire world came to a standstill due to the COVID-19 pandemic. In the case of 1L Olivia Hiltbrand, 2020 brought more obstacles than just the pandemic.

Having received her undergraduate degree in Industrial and Labor Relations from Cornell, Olivia said law school was initially on her radar before changing her mind upon graduation. Instead, she decided to pursue a career in journalism and received her master’s in Broadcast and Digital Journalism from Syracuse in 2012.

“I thought I would go to law school right after undergrad,” she said. “I interned at the county prosecutor’s office in Syracuse and had a great experience, but ultimately didn’t see myself doing prosecuting or criminal law at that time.”

After almost a decade in broadcast journalism, Olivia and her husband Brett were settled in Cleveland when the COVID-19 pandemic hit. After doing remote interviews for months on end as a reporter for WEWS, Olivia began to reconsider her stance on a legal education. She had taken the LSAT and began applying to law schools when she was diagnosed with T-cell acute lymphoblastic leukemia/lymphoma, a rare, fast-growing cancer in October of 2020.

“Right off the bat, they told me my treatment was going to be two-and-a-half to three years, which was really daunting for both Brett and I,” she said. “I am thankfully in remission, but I have been getting consistent chemo treatments for two years now.”

Olivia has fortunately not had any setbacks, outside of the side effects from chemotherapy, since beginning treatment two years ago.

Despite her diagnoses, Olivia did not stop her pursuit of going to law school.

Upon her initial acceptance to Moritz during the 2020-21 cycle, Olivia received the Eminent Scholarship based on her academic merit. After accepting the offer in the spring of 2021, she requested, and was granted, a one-year deferral on both her admission and the scholarship. She then applied for and was awarded the Michael E. Moritz Scholarship, which replaced the Eminent Scholarship in the following admissions cycle. After a full year off in order to focus on her health and wellness, Olivia started her law career in August 2022 as a full-time student.

“It has been great so far. A lot of work which was expected, but I have always been a huge nerd. I love going to school,” Olivia said. “It has also been an adjustment. For the better part of the last two years, I was only leaving the house to go to doctors’ appointments.”

Although she is scheduled to remain in treatment through June of 2023, Olivia’s experience through her first few months of law school has been largely positive.

“All of my professors have been great. Not only are they all very accomplished, but they are also just really kind people,” she added. “I have been very impressed with how well the university and the law school have handled disability accommodations for me, because I don’t have the energy to do what the typical law student does. I have to remind myself that I am still in treatment.”

While at Moritz, Olivia said she would like to prepare herself for a career in media law. After spending nearly a decade as a practicing reporter, she said that her passion for journalism is still strong and she would like to be an advocate for those who are still practicing in the field.

“I would love to be able to help journalists obtain public records or make sure they are properly represented if they are being sued for defamation,” she said. “I think that is really important and that journalism is essential to our democracy. I think the work that I will take on as an attorney will be more my speed.”